Entry Island – Behind the Scenes

With my new novel, Entry Island, due out on Kindle tomorrow, I thought I would share the story behind it with my readers.

My decision to write Entry Island stemmed from my interest in the Highland Clearances.

Like many of my generation I did not become aware of the history of The Clearances until the years after I had left full-time education. I took Higher history at school, but this was not a subject on the syllabus. Why, is still a mystery to me, since it is one of the most shameful periods in recent British social history. It was first drawn to my attention by the 1970s John McGrath play, “The Cheviot, The Stag and the Black, Black Oil”.

The Clearances was a phenomenon that took place in several waves in the Highlands and Islands of Scotland over the course of around 100 years during the 18th and 19th centuries. It followed on from the defeat of the Jacobites (who wanted to restore the Stewarts to the British throne) at Culloden in 1746. Most of those who fought in the Jacobite rebellion were Highland crofters and farmers called to arms by their clan chiefs in support of Bonnie Prince Charlie. Since a clan chief in those days was both benefactor and landlord, the Highlanders, who were mostly Gaelic speakers, had no choice but to do as they were told. They were, essentially, canon-fodder. 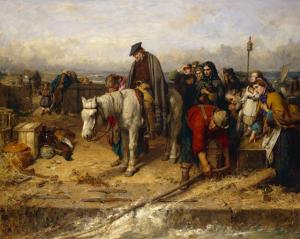 But the British government, determined to dismantle the clan system and exact retribution, banned all things Highland – the playing of the bagpipes, the wearing of the kilt, the carrying of arms – and a lengthy and institutionalised persecution against Gaelic speakers was instigated (someone speaking Gaelic in a court of law was deemed not to have spoken). In the immediate aftermath of Culloden, a regiment comprising prisoners from English prisons was set loose in the Highlands, slaughtering Gaelic speakers and their families.

Many clan chiefs were disposessed of their land and a new generation of landowner took over the vast Highland estates they vacated. The crofters, whose ancestors had worked the land for centuries, were seen as a burden. They made no money from the land, which provided subsistence only, and were unable to pay rent. So, with financial incentives from the government, this new breed of landowner systematically began to replace people with sheep, which were regarded as a more economically viable use of the land.

Hundreds of thousands of people were forcibly removed from their homes, which were often set alight to prevent them returning. Many were forced to the coastal fringes where there were no settlements, and where without the requisite fishing talents or boats, they lived and died in dire poverty. Others were forced, sometimes in chains, aboard boats bound for the New World. They had no possessions and no money, and faced the most appalling conditions as human ballast aboard sailing ships designed to carry cargo, not people. By the mid to late 19th century the British government had legislated to lay down minimum conditions aboard the “slavers” – ships carrying slaves from Africa to America. But these conditions did not apply to the emigrants forced to sail the Atlantic during The Clearances. Many of them did not survive the voyages. 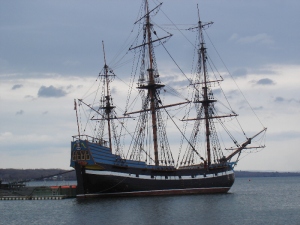 Fuelled by the injustice of The Clearances, and the knowledge that no one had really tackled the subject in fiction, I decided to make this the focus of the book that would follow The Lewis Trilogy. But I didn’t want to write a historical novel, and as a crime writer I obviously had to find a way of bringing the criminal, the contemporary and the historical, all together in one story.

I knew that there had been some particularly brutal land clearances in the Hebrides, and since this was on my patch, so to speak, I decided to set the historical element of the story on the Isle of Lewis and Harris, creating a fictitious estate and township that would serve as a typical example of some of the more violent clearances. For this I drew specifically on real events that took place on Barra, the west coast of Harris, and the village of Solas in North Uist.

For the contemporary element of the story, I turned towards Canada where many Highlanders ended up. I had initially intended to use Nova Scotia and Prince Edward Island as the centres of the contemporary crime story. But two coincidences changed my mind.

Quite by chance I received an email from a reader of the Lewis Trilogy. Her name was Marilyn Savage, and she was a presbyterian minister in Canada who had grown up in the Scottish communities in the Eastern Townships of Quebec. After several exchanges by email, it became clear to me that this is where my story should take place.

But specifically, for my tale, I required an island setting. Here the second coincidence came into play. My neighbour in France is a Quebecois, who grew up in the Magdalen Islands (les îles de la Madeleine) in the Gulf of St. Lawrence. I had seen photographs of the islands and been struck by the similarity to the Hebrides, and when further research revealed the presence of large communities of “cleared” Hebrideans in the Canadian province, that became the natural setting for the book.

The discovery that an island in the St. Lawrence River, just downstream from Quebec City, had been used as a quarantine station for arriving emigrants, brought the final piece of the story into play. And I set off for Quebec to do my research.

After research sessions at the Sûreté de Police in Montreal, the Eastern Townships of Quebec (now known as the Cantons de l’est) were my next port of call. I was fortunate to arrive at the most beautiful time of year, when the leaves in the forests that would have been so unfamiliar to arriving Hebrideans were turning the most extraordinary colours. There, with Marilyn Savage, her mother and daughters as my sherpas, I visited towns and villages established by Hebrideans cleared off their land. There is actually a town called Stornoway. Another called Tolsta – which is the name of the village on the Isle of Lewis from which Marilyn Savage’s ancestors hailed. Another settlement describes itself as the Hebridean village of Gould. A tour of the cemeteries of these townships was a sobering and emotional experience. For here, buried in the ground thousands of miles from their homes, lay Macleods, and Macritchies and Macdonalds, and many others forced to leave their villages by unscrupulous landlords. People who had survived the voyage by sea and somehow endured to establish these communities.

I went to the homes of some of their descendants and met some very elderly ladies in their late eighties and nineties who still speak Gaelic. They spoke of their pride in their roots, and in the fortitude of their ancestors who had survived and thrived against all the odds.

I flew out to the Magdalen Islands, which are situated in the middle of the Gulf of St. Lawrence and totally isolated from the North American mainland. These islands, which comprise part of the province of Quebec, are French speaking, and largely populated by ancestors of the Acadians forced out of Canada by the British. One tiny island, however, is resolutely English-speaking. It is called Entry Island, and many of its inhabitants are of Scots descent. In fact, most of the English speakers in the Magdalen islands (about 5 percent of the population) are descended from emigrants who were shipwrecked on their way to Quebec City – for the islands stand in the middle of the sea route to the mouth of the St. Lawrence River, and without a lighthouse were the cause of hundreds of shipwrecks over many years.

I then visited the quarantine island of Grosse Île, which has been preserved as a museum since its final closure in 1937. It is an island still haunted by the thousands who died there in long sheds known as Lazarettos, in the hospital where desperate staff worked in appalling conditions to try to save the lives of emigrants suffering from the diseases they had brought with them aboard their ships, and in the boats that were forced to anchor in the bay and fly the yellow quarantine flag.

My central character, Sime (a corruption of Sim, the Gaelic for Simon, which is pronounced “Sheem”) Mackenzie, is a homicide detective with the Sûreté in Montreal. His family, too, were of Hebridean descent, and he grew up in an English-speaking household in the Eastern Townships at a time when only French was spoken at school. He is, therefore, fluently bilingual – which is why he is chosen to travel with the French-speaking investigation team to Entry Island when a brutal murder is committed there.

When Sime arrives, it is only to discover that the wife of the victim, and prime suspect in his murder, is unaccountably familiar to him, even although they have never met…

39 Responses to Entry Island – Behind the Scenes