The Girl from the Farm

This isn’t the blog I planned to write.  But it’s a story I need to share, a kind of spreading of the pain.

I was just four years old when I started school in 1956.  I remember that first day well.  My mum walked me to the school.  It was about two miles.  But I figured I was a big boy, and could find my own way home.  So I insisted that she didn’t come to get me at the end of the day.

Of course, I got lost.  And there was a great hullabaloo.  Memorable first days!

But there is something else that sticks in my mind about that particular first day.  I fell in love.  How ridiculous is that!  Four years old.  But I did.  With a little girl I had cast eyes on for the very first time.  Her name was Jennifer, and she lived on a farm a couple of miles away in the opposite direction from where my house was.

She had a beautiful dimpled smile, and pigtails in ribbons, and she used to dip her head coyly and look up at me with lovely dark eyes.

Come Saturday morning I told my parents I wanted to go to the farm to play with her.  And to my dismay I was expressly forbidden.  It was too far, and entailed the crossing of two busy main roads!

So, naturally, the following weekend I made a secret trip to the farm without telling a soul.  I carefully crossed the first main road, and then walked the rest of the way on farm roads till I could see her farm in the distance.  To avoid the second main road I took a short-cut across the fields, running with arms windmilling past a startled bull before it had a chance to take stock and charge at me.

Jennifer and I played games among the bales in the barn.  And I had my first ever kiss there.  I went back over several weekends, until one fateful day her mum took it into her head to phone my mum to ask if I could stay for lunch.  And the cat was out of the bag!

No more illicit visits to the farm.

But our relationship continued off and on through the seven years of primary school.  The final dance, before heading off to secondary school, was called the Qualie (qualification) Dance.  And it just happened to coincide with one of our off periods.  So I asked a girl called Irene to go to the dance with me instead.

The week before the dance I received in the post a letter from Jennifer.  She couldn’t understand why I hadn’t asked her, and suggested that my friend Derek could take Irene and I could ask Jennifer instead.  It was signed “The Girl from the Farm”.  I still have that letter today.  But it was all too late, and I have regretted all my life the hurt I caused her.

I went to the dance with Irene, and Jennifer and I went on to different secondary schools.

Years later, working as a journalist in Glasgow, I saw an article in the paper about the first ever policewoman to take charge of a traffic patrol car.  It was Jennifer.  And then a year or so later, I met her in the High Court when I was covering a murder trial, and she was accompanying a child witness.  We exchanged a few awkward words, and I never set eyes on her again.

Fast forward to a few short years ago.  I had finished writing my series of China Thrillers, and started work on a new, totally different novel set in the Outer Hebrides of Scotland where I had spent five years filming a TV drama series.  In the story, much of the narrative involves the main character’s recollections of his childhood, growing up on the island, and for inspiration I drew heavily on my own childhood years.

Jennifer featured prominently and became the character called Marsaili.  The illicit visits to the farm, the kiss among the bales, became immortalised in the text.  Even the letter from “The Girl on the Farm”.  The book is called “The Blackhouse”, and it will be published by Quercus on February 3rd.  So a few months ago I thought it would be fun to track Jennifer down to let her know that our childhood adventures had made their way into fiction. 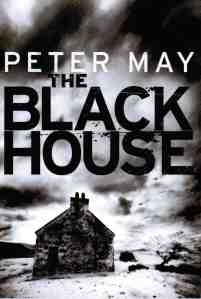 But when I went searching for her on the net, there was no trace of her to be found.  From my home in France I managed to track down the farm, and look at it courtesy of Google Street View.  No longer a working farm, it has been converted into an elegant upmarket residence.

I searched “Friends Reunited”, where former pupils and workmates reconnect.  No sign of her.

Eventually I accessed the National Archives of Scotland online.  At the ScotlandsPeople Centre, it is possible to track down the registration of births, deaths and marriages.

To my astonishment there was no record of Jennifer’s birth between 1950 and 1952.  I widened the search, figuring that maybe Jennifer was her middle name.  Still no luck.  I wrote to our old school.  No reply.  It was as if she had never existed.

Then a few days ago, I tried searching through the marriage records and cross-referring them with birth records.  Which is when I discovered that a Janet with the same surname, born at Carluke in Lanarkshire in 1952 (not that far from the farm Jennifer’s father tenanted), had married in 1977.  Then four years later, she remarried.  The marriages were registered in the Mearns and Eastwood district where we had grown up.

I was almost certain that this was Jennifer.  There were no other possibilities.  Maybe her mother was called Janet, and they had used the name Jennifer to avoid confusion.  But not another record could I find of her anywhere.  And so in an attempt at absolute verification I tried one last place.  Registration of deaths.

And there, in 2002, recorded in the district of Mearns and Eastwood, was the death of that same Janet.

There was still an outside chance that I was wrong.  But then, by a strange quirk of fate, that very same day I finally received a reply to the query I had sent to our old school.  Someone there knew of Jennifer’s family.  My hopes were raised, only to be dashed almost immediately by the news that my searches in the national archive had brought me to the correct conclusion.

That little girl whom I’d fallen in love with on that first day at school, was dead.  And a little bit of me died too, when I learned that.

In the book, my main character, Fin, gets to see Marsaili again – eighteen years later.  Here is the moment…

He slowed and turned down on to the Macinnes drive and stopped the car in front of the garage doors. A blink of moonlight splashed a pool of broken silver on the ocean beyond. There was a light on in the kitchen, and through the window Fin could see a figure at the sink. He realized, with a start, that it was Marsaili, long fair hair, darker now, drawn back severely from her face and tied in a pony tail at the nape of her neck. She wore no make-up and looked weary somehow, pale, with shadows beneath blue eyes that had lost their lustre. She looked up as she heard the car, and Fin killed the headlights so that all she could see would be a reflection of herself in the window. She looked away quickly, as if disappointed by what she’d seen, and in that moment he glimpsed again the little girl who had so bewitched him from the moment first he set eyes on her.

I don’t know why I should have believed that any of us is immortal.  But somehow, I really always thought I would see wee Jennifer again.

I am in touch now with her family.  She is survived by her sister and two sons.  And I wanted them to know that even although Jennifer passed away eight years ago, she lives on in the words I wrote, and in the memories I have of those days on the farm.

64 Responses to The Girl from the Farm