Fame in a Bottle

I live in a country where streets and squares are named after famous writers, inventors, soldiers and politicians.  But I think I have found a new slant on this – and one which has a very personal connection to me and my books.

A number of years ago, I was drawn to the Gaillac wine-producing region of south-west France.  Two particular wines had attracted me:  the Cuvée Special of Château Lastours, and the oak-aged Syrah of Domaine Sarrabelle.  I had tasted both, and loved them, and so decided to track down the vineyards that produced them.

It was a fateful decision.  Because I fell in love with Gaillac and its wines, and decided to set one of my series of Enzo Files books among the vineyards of the area. 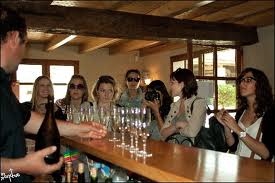 I was given full access to both wineries during the harvesting and production of the wine, and in fact spent a morning hand-picking grapes with the family Caussé and their friends on Domaine Sarrabelle – sweet, white Mauzac grapes for the Methode Gaillacoise (the Gaillac version of Champagne).  Afterwards, I lunched with them at a long table in the cellar of their house – consuming copious amounts of good food and wine.

When the book came out and I went to the States to promote it, Domaine Sarrabelle had wines shipped out so that I could offer my readers, at the various book events, a taste of the wines they were going to read about.  And as a reward for my promotion of Gaillac wines abroad, I was made a Chevalier of the Ordre de la Dive Bouteille (the Order of the Divine Bottle).

Domaine Sarrabelle went on to stock and sell English copies of my book in their tasting room, and still do, while awaiting the translation of the Enzo Files into French.

I make frequent visits to the vineyard to stock up on my favourite wines, and have become firm friends of Fabien and Laurent Caussé, their partners, parents and grandparents.

I recently returned for a tasting tour during the autumn wine-fest, and imagine my surprise when Fabien steered me into the huge wine shed and produced two bottles for me to look at – one red, one white, both bearing a white cross insignia and the name Croix Blanche.

They had named two new wines after the fictitious name I had given their vineyard in the book.

I was both touched, and honoured, and consider that having a wine called after a creation in one of my books is an even greater distinction than having a street named after me.  Boulevard Peter May doesn’t really chime.  But to sit round a table with friends at a meal and quaff a bottle or two of Croix Blanche seems to me like the ultimate accolade.

PS:  Believe it or not, these wines are now available in the United States, imported by Jon-David Headrick Selections LLC of Asheville, North Carolina.

5 Responses to Fame in a Bottle